Sometimes when you're deploying an app you actually need to deploy more than one 'runnable thing'.  As an example, imagine you're deploying something like OpenOffice and you want to have an app for spreadsheets, one for word documents, one for presentations etc: 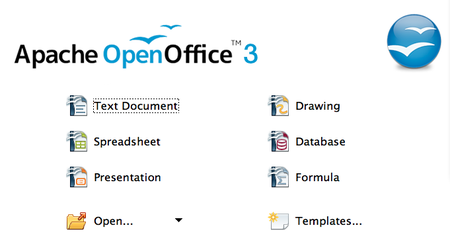 Alternatively maybe your app really is just one app but you want to let the user run a configuration utility separately from your app (some games might be a good example of this).

This is the idea behind Apps versus Virtual Apps in JWrapper.

Your App Bundle is the whole downloadable, installable bundle that sets up its own JRE and extracts all the files.  Inside that though JWrapper lets you define multiple Virtual Apps, each of which the user ends up seeing as a 'runnable thing'.

Exactly how the user sees this depends on the OS.  On Windows and Linux they get a shortcut for each one but MacOS is a bit different.  MacOS doesn't have the concept of a 'start menu' with folders for grouping so if you wanted to deploy all the 8 virtual apps above you'd end up with quite a disjointed mess in your Applications folder.  Instead, JWrapper puts one app into the Applications folder and shows a chooser to the user when it launches:

Virtual Apps though aren't just to let the user choose between different things they can run.  You can configure them to be invisible to the user and then use them under the hood in your application.

When you create a virtual app in JW you can make it hidden and then use the JWSystem.forkVirtualApp method to run it.  You can pass in launch properties rather than command line parameters which removes OS specific issues of encoding or special characters along with any limits on how much you can pass to your child app.  You can have it check for an update before it runs and you can also ask it to prompt the user for elevated permissions.

How to create virtual apps

To define a virtual app you should add a top level <App> tag and then you can use the following tags within that: